Text as sound and music, an introduction by Øystein Elle (NTA): To what extent might an aural, abstract treatment change the perception of the textual material? What can a musical adaption of the linguistic sounds give to the narrative, the understanding and the experience of text?

In the program for today, my introduction has the title: “Text as sound and music” below this I have added two questions. The first question confuses myself a little.

“To what extent might an aural, abstract treatment change the perception of the textual material?”

If we assume that the text is what is written down, then the sonic treatment has an executive function. After having retrieved information from the written characters, these are interpreted, often by a human, and then sent out as sounding language. The sounding language is often consistent with what the characters on for example the paper-sheet represents, other times the practitioner will perform a linguistic translation of these characters, perhaps adjusted so as to reach a certain kind of receiver. Either because the performer consider that the receiver of the text do not understand the written language, or perhaps the recipient is a child. In this case the performer of the text characters might want to adjust the textual content in order to make it more easily comprehensible to the child.

What we as performers of text characters do is to communicate, and / or interpret text. Often this is done aurally.

When we perform notated music, we relate most often to scores with some form of notation. Often the composer imagined a sounding outcome from the musicians interpreting the written signs; other times the musicians are freer in their shaping of the sounding result.

Text is presented most often as abstract signs that must be exerted in order to be to lingual sounds. The author assumes that they may represent relatively indisputable language sounds.

Music compositions are presented to a musician often as abstract signs understood as notation. These signs are being interpreted and conveyed by the performer. How it is communicated is dependent on many factors. To name a few: The skills of the musicians, the sense of style, geographical origin, cultural origin, curiosity, creativity, obedience, habit, tradition.

A question I ask myself is: Does the music exist before it is performed? If so, in what form?

So one might say that written text is as abstract as notated music.

The concretization of the text is thus to give it a language. This may be close to the author thought. Maybe one even get instructions from the author. Alternatively, you are more or less free as a performer to interpret and convey a textual material.

To get back to why I find my introductory questions confusing:

I do not see aural treatments of text as abstraction, contrary; I see it as a concretization of abstract characters.

What changes the perception of the textual material is than not at least how the sonic treatment is carried out.

Often the method you use to communicate various written texts is depending of the aesthetics one thinks would be expected.

This is related to genre, era, and other aspects.

There will probably be expected a different kind of interpretation of a text as “The Rock” by T.S. Eliot than the performance of the poem “Ursonata” by Kurt Schwitters.

Chorus VII form the play “The Rock” By T.S. Elliot

In the beginning GOD created the world. Waste and void.

Waste and void. And darkness was upon the face of the deep.

And when there were men, in their various ways, they struggled in torment towards GOD

Blindly and vainly, for man is a vain thing, and man without GOD is a seed upon the wind:driven this way and that, and finding no place of lodgment and germination.

They followed the light and the shadow,

and the light led them forward to light and the shadow led them to darkness, Worshipping snakes or trees, worshipping devils rather than nothing: crying for life beyond life, for ecstasy not of the flesh. Waste and void. Waste and void. And darkness on the face of the deep.

And the Spirit moved upon the face of the water. And men who turned towards the light and were known of the light Invented the Higher Religions; and the Higher Religions were good And led men from light to light, to knowledge of Good and Evil. But their light was ever surrounded and shot with darkness As the air of temperate seas is pierced by the still dead breath of the Arctic Current; And they came to an end, a dead end stirred with a flicker of life…..

Roy hart performing the chorus VII of “The rock” 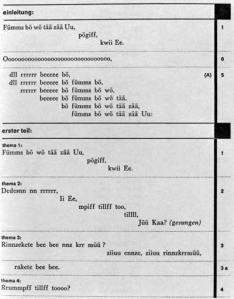 The German multi artist Kurt Schwitters wrote his sound poem “Ursonata” (Sonata in primal sounds) between 1922 and 1932. Its form is similar to a classical sonata or symphony. It consists of four movements: Prima parte, Largo, Scherzo and Presto .

Schwitters said about his writing: “the elements of poetry are letters, syllables, words, sentences. Poetry arises from the playing off of these elements against each other. Meaning is only essential if it is to be used as one such factor. I play off sense against nonsense. I prefer nonsense, but that is a purely personal matter. I pity nonsense, because until now it has been so neglected in the making of art, and that’s why I love it.”

We just heard examples of aural treatment of text. One (the ursonata)where performed pretty much in the manner the author had explained. And the other (the rock) in a rather experimental way at the time.

Wittgenstein claimed that language is a prerequisite for consciousness. Further, he said that the language sets the limits of our consciousness, our universe.

So, in sounds of language is future and hope. Since the language sets the limits of our consciousness, where do we go if the language sounds is not being maintained or developed?

In my own work as a researcher I am often searching in the text beyond its narrative function. Listening what the text gives me and says, without relating to its linguistic function. As to consult radio programs in foreign languages. Not to wish to speak the languages, but to enjoy timbres, rhythms and musical structures without disturbing meaning.

Maybe one can release more contents in a text by treating it as a source of sonic experiences? Perhaps, by taking the texts musical, instrumental, aural qualities and possibilities seriously one can add an important value to the narrative structure? Although … the sound in itself often can be enough.

It is a construction of the word Eple. I translated it to 14 languages. Then I treated these 14 versions of the word apple through a generator which is based on the Russian mathematician Andrej Markov’s probability calculation on what letter comes after another. The algorithm is called Markov Chain

This and other machines digital or analogue can be used to rework existing text. Is it still the original text if the words are re-arranged? Or, if the letters is re-arranged? Will traces of the authors consciousness come through the transformed text?

Perhaps this “new language” provides another way of understanding text, on another level than the purely cognitive?

As a thought further on the idea of sound poems as we know them, I think it is interesting to borrow linguistic sounds and gather vocal data concerning vocal aesthetics from the ports of the world. As a nomadic voice travelling through time and space, working with traces from the past, harmonically, melodically or linguistically. In this way sense and non-sense will differ according to the approach of a listener, and of the context.

A solid branch of literature is the nonsense literature, a broad and diverse genre with many directions. Usually challenging linguistic conventions and logic.

But still, the most known examples of non-sense literature are rhymes and jingles, most often for children. I want to give a little example from the Norwegian poet Andre Bjerke.

When working with text I expect several of us come to a point where we wonder whether the meaning of the text disappears in the experiments. Either the experiments is with your own text, or if you are working on already existing material.

Explanations found on a web search connected to non- sense:

“Nonsense literature is effective because of the human desire to find meaning everywhere, in everything, and where perhaps none exists”

“The effect of nonsense is often caused by an excess of meaning, rather than a lack of it.”

Yet another different way of seeing text as music, is the text scores.

This scores is read as a form of notated music. Some leave a great deal of freedom to the interpreter, others are more strict and precise in their instructions.

Another kind of text score is this example by the American composer and performer Pauline Oliveros. 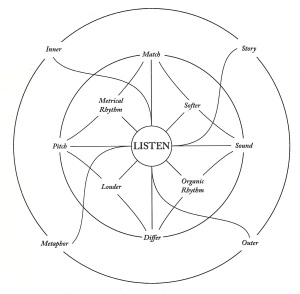 In the end I want to show you yet another example of how a musical treatment may alter the perception of a text: